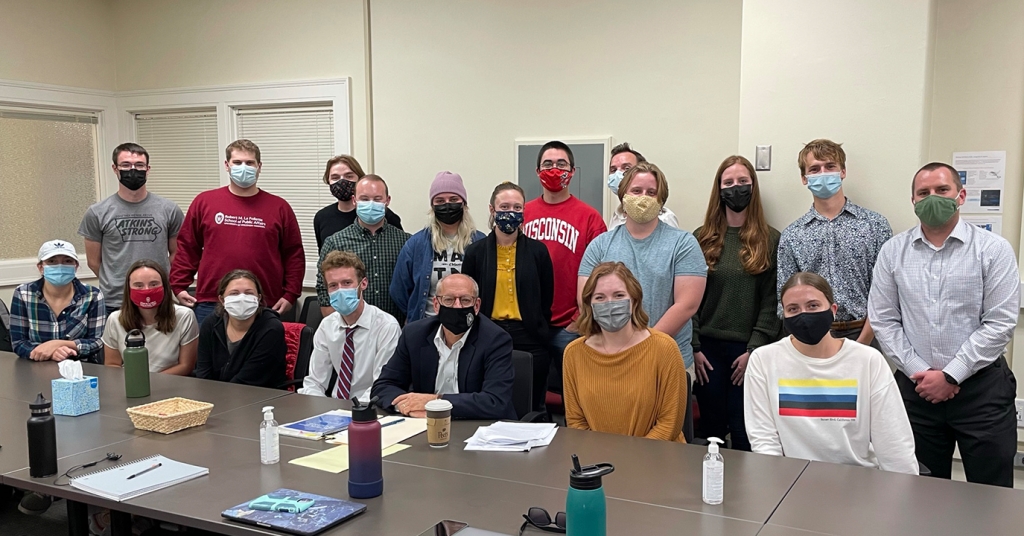 Jon Leibowitz, former chair of the Federal Trade Commission (FTC) and the La Follette School’s first ever Policymaker in Residence, covered a lot of ground during his campus visit October 18 to 20. Literally.

Starting with a Monday morning lecture at Science Hall to Assistant Professor Denia Garcia’s undergraduate students and ending with a surprise visit to the La Follette School Student Association’s Wednesday night trivia contest, Leibowitz crisscrossed campus and much of Madison, teaching classes and meeting with faculty and students.

A highlight of his visit was the virtual event Surveillance Capitalism in the Digital Age, sponsored by the Cap Times. In a lively conversation with reporter Jessie Opoien, he talked about the FTC’s work under his leadership to rein in the lucrative trade in personal data that has allowed companies like Facebook and Google to make fortunes buying and selling private information about the people who use their sites. Describing himself as a “glass-half-full guy,” he expressed cautious optimism that Congress will eventually pass privacy legislation to safeguard consumers’ control over their own data. You can watch the entire event online.

In class lectures, Leibowitz shared his Washington-insider expertise. He told students about the tough realities of policymaking in Washington while emphasizing the personal satisfactions of a life in public service. He told inspiring stories about former U.S. Sen. Herb Kohl, for whom Leibowitz served as chief counsel early in his career. In office hours on the Memorial Union Terrace, he engaged in friendly, wide-ranging conversations with La Follette School students, eager to share career advice and beginning every interaction with the same request: “Tell me about yourself.”

And about that trivia contest: When Leibowitz strolled into Giant Jones Brewing Company in the middle of round three, things were looking bad for the faculty table. But he put his expansive UW–Madison history-major knowledge to work, helping them score a triumphant win.