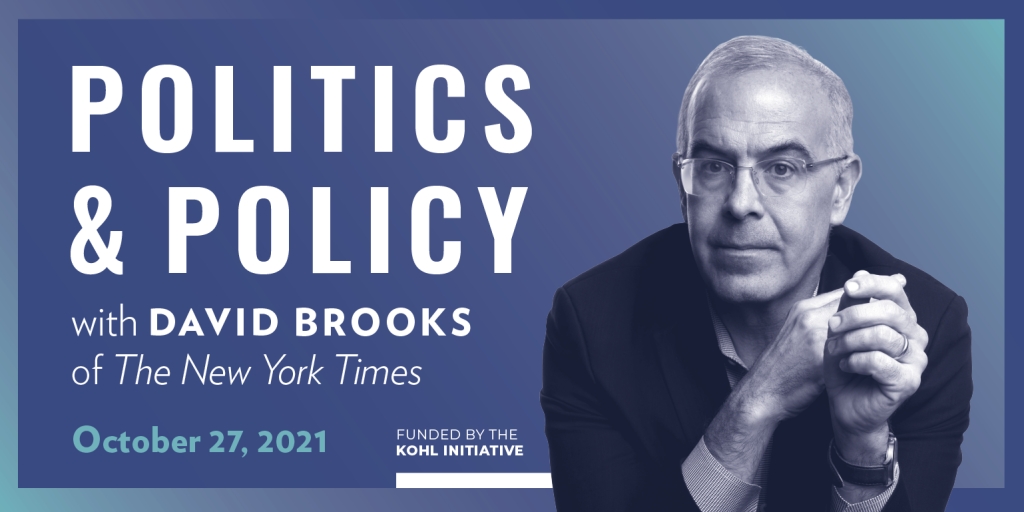 The La Follette School is hosting writer and commentator David Brooks on Wednesday, October 27. Free general-admission tickets for the presentation, Policy and Politics with David Brooks, are sold out; however, tickets for online viewing are available via the Memorial Union Box Office.

In addition to his 7 p.m. talk in Shannon Hall of the Memorial Union, Brooks will meet with La Follette School students as well as campus and community leaders.

“We are thrilled to have David visit the UW–Madison campus,” said La Follette School Director and Professor Susan Webb Yackee. “He is an astute observer and commentator on policy, politics, and foreign affairs, and we welcome his insights during this critical time in our country’s history.”

Brooks’ visit is made possible by the La Follette School’s Kohl Initiative, which was launched in May 2019 with a $10 million from former U.S. Sen. Herb Kohl.

Brooks has been an op-ed columnist for The New York Times since September 2003. He also is a best-selling author and analyst on PBS NewsHour, NPR’s All Things Considered, and NBC’s Meet the Press. His fifth book, The Second Mountain: The Quest for a Moral Life, was published in April 2019.

In 2018, he joined the Aspen Institute to spearhead the Weave project, aimed at bridging the differences that divide Americans and seeking out a compelling common ground. He also teaches at Yale University and is a member of the American Academy of Arts and Sciences.

Brooks also is serving as UW–Madison’s Public Affairs Journalist in Residence, which is sponsored by University Communications, the School of Journalism and Mass Communication, and the La Follette School, with support from the Wisconsin Foundation and Alumni Association.