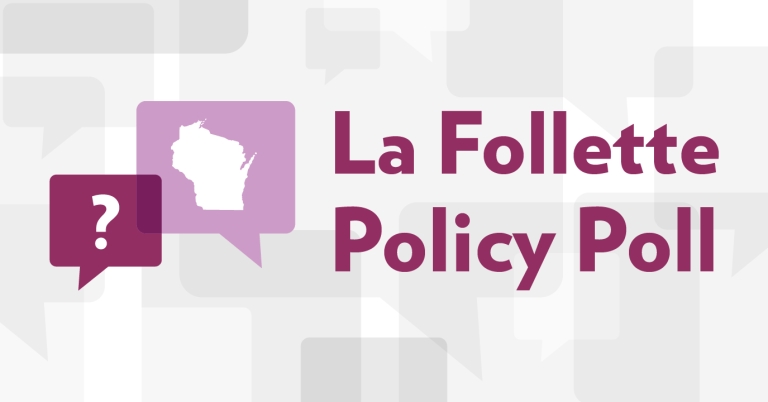 La Follette School Director Susan Yackee invites current students and alumni to dig into the results of the first La Follette Policy Poll and share their analyses of public opinion in the Badger State.

Released on January 11, the poll asked Wisconsinites about the public policy issues they worry about most. With Wisconsin poised to be a battleground state in the 2022 elections, residents’ opinions on these issues could have national implications.

The polling questions covered a range of topics, including:

The results reveal a host of interesting details about Wisconsin residents. For example, respondents identifying as female are more likely than males to support solutions to climate change, such as new technologies and industry taxes to remove pollution. People 18 to 44 years old are more likely to be concerned about the nation’s health care system than their elders, but there is broad agreement across all age groups that race relations in the country are problematic.

As Yackee explained in a recent Milwaukee Journal Sentinel column on the poll, “Such consensus among Wisconsinites is just one example of why polling on public policy matters. It points our elected leaders to problems that residents agree need solving, encouraging them to work together on common-sense policy solutions.”

Results are available for interactive analysis in Tableau Public, allowing the public to create visualizations they find most compelling. Interested in doing some visualizations of your own? Email screenshots and a brief description of each visualization to Ann Shaffer at ann.shaffer@lafollette.wisc.edu. Prizes will be awarded for the best example of consensus on a policy issue and most surprising results.

And feel free to submit suggestions for ways to improve the current poll or ideas for future surveys. But whether there will be a future poll is an open question. According to Yackee, “As all La Follette School students and alumni know, we are an evidence-based institution. If the evidence shows that the poll results are widely used, both inside and outside the university, then we will consider doing another one.”