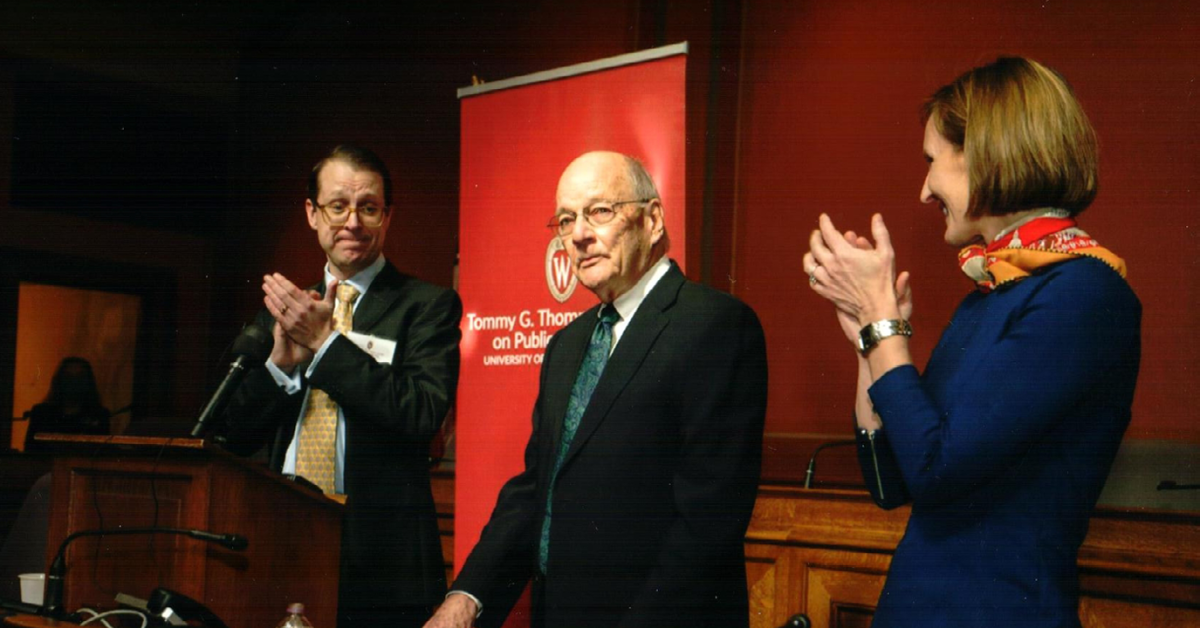 Ambassador Tom Loftus and La Follette School Director Susan Webb Yackee nominated Lang for the award, which recognizes Wisconsin leaders who have committed themselves to public service and worked tirelessly to advance sound public policy. Lang was honored at a ceremony at the Wisconsin State Capitol on February 23.

A member of the La Follette School board since 2015, Lang has served as director of the Wisconsin Legislative Fiscal Bureau since 1977. A nonpartisan service agency of the Legislature, the Fiscal Bureau provides policy, program, and fiscal analyses to state legislators, including the Joint Committee on Finance. Lang has hired dozens of La Follette School master’s degree graduates and is known for his sincere dedication to his staff, which has contributed to the success of the Legislative Fiscal Bureau.

Lang’s collegiality and nonpartisan leadership style, even in the face of unprecedented partisanship, uniquely qualifies him for this award. Lang believes that the integrity of the Fiscal Bureau depends on this. He has graciously shared his knowledge and experiences during La Follette School student visits to the Fiscal Bureau. “The La Follette School has been a bridge that connects the two ends of State Street,” Lang pointed out during a 2013 commencement address to La Follette School graduates. “This was the vision of Robert M. La Follette – the university and state government working together to do good things for the people of Wisconsin.”

It is to the La Follette School’s benefit that Lang is a member of its Board of Visitors, which provides important guidance by identifying resources that can raise the stature and standing of the school, helping with fundraising, providing career advice to students, and acting as goodwill ambassadors. “It is a privilege to serve on the Board of Visitors and witness La Follette’s position of prominence among the elite schools of public policy in this country,” says Lang. He has also served on the advisory board of the Policy Institute for Family Impact Seminars and has been recognized for his community service by Big Brothers and Big Sisters of Dane County, the Rotary Club of Madison, and United Way of Dane County.