Created in 2007, the Paul Offner Lecture Series is sponsored by UW–Madison’s La Follette School of Public Affairs and the Washington, DC-based Urban Institute.

The lecture series honors the late Paul Offner, whose left a legacy of applying good scholarship to public policy, especially for disadvantaged people.

This is an accordion element with a series of buttons that open and close related content panels.

Paul Offner began his distinguished career in government, research, and education in Wisconsin, where he served in the State Legislature from 1975 to 1984.

He died from cancer in 2004 at the age of 61, leaving a legacy of applying good scholarship to public policy solutions, especially for disadvantaged people. 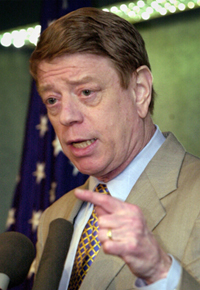 This is an accordion element with a series of buttons that open and close related content panels.

Offner He moved to La Crosse, Wisconsin, in 1973 to start what turned out to be a long career as a public intellectual. He represented the La Crosse area in the Wisconsin Assembly from 1975 to 1977 and in the Wisconsin Senate from 1977 to 1984.

As a state senator, Offner was assistant majority leader, chaired the Joint Committee on Finance Subcommittee on Health and Social Services, and authored laws that licensed health-maintenance and preferred-provider organizations, established competency testing in public schools, and reformed the state’s civil service system.

In 1984, after running for lieutenant governor and Congress, Offner left Wisconsin to serve as deputy director of the Ohio Department of Human Services, administering the state’s cash assistance and Medicaid programs. He later was a senior legislative assistant to US Sen. Daniel Patrick Moynihan.

Offner also served as chief health and welfare counselor for the U.S. Senate Finance Committee, which was responsible for health and welfare policy development. During this time, he was a member of the White House Health Care Task Force and coordinator of welfare reform for President Bill Clinton’s transition team.

He later was commissioner of the District of Columbia’s Commission on Health Care Finance, overseeing the city’s Medicaid and State Children’s Health Insurance Programs and was a research professor with Georgetown University’s Institute for Health Care Research and Policy. Offner also was an adjunct faculty member of Georgetown’s Public Policy Institute.

In 2002, Offner left Georgetown University for the Urban Institute, where he contributed to breakthrough research on poverty in America. He wrote numerous articles on health care, welfare, and social policy that were published in national journals, and he was a frequent contributor to the op-ed page of The Washington Post and other major newspapers.

With Harry Holzer and Peter Edelman, Offner wrote Reconnecting Disadvantaged Young Men (2006), which was published after Offner died of cancer in 2004 at the age of 61. The book offers an array of policies to improve the lives of young people who are out of work and out of school.