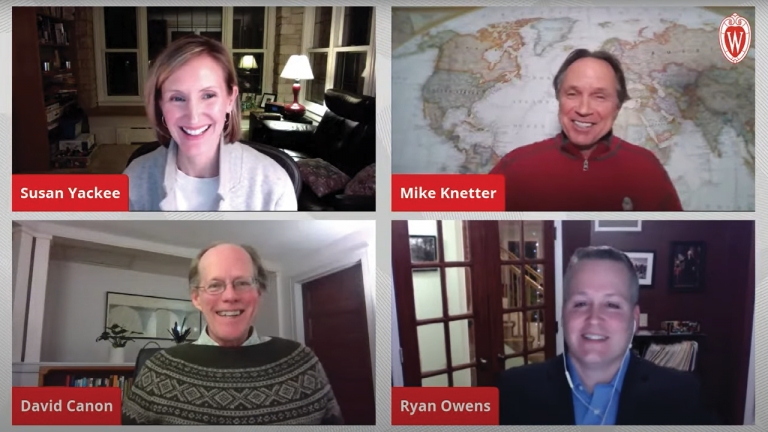 Nearly 2,200 people have watched The Future of Politics and Policies with La Follette School Director and Professor Susan Webb Yackee, which was livestreamed Tuesday, January 12. Video of the event is on the Wisconsin Foundation and Alumni Association (WFAA) YouTube channel.

La Follette School faculty affiliates David Canon and Ryan Owens joined Yackee for the discussion, which drew 700 UW–Madison alumni and other people during the live event. Each panelist gave brief opening remarks and then answered questions submitted by alumni and other viewers from across the country. Foundation CEO and President Mike Knetter, former Dean of the Wisconsin School of Business, moderated the discussion.

Yackee, who joined the La Follette School in 2007, is a Collins-Bascom Professor of Public Affairs and Political Science at UW–Madison. Her research and teaching interests include the U.S. public policymaking process, public management, regulation, administrative law, and interest group politics.

Yackee’s introductory remarks focused on Executive Branch powers that President-Elect Joe Biden and his administration might use to change the course of policymaking in the United States.

One tool the Biden-Harris administration might use, she said, is the lengthy regulatory process. Yackee also highlighted the little-known Congressional Review Act (CRA), which provides an expedited process for Congress to overturn recently enacted regulations. Yackee said she expects the new Democratic-controlled Congress to use the CRA for some regulations passed late in the Trump administration.

Like many previous presidents, she said, President-Elect Biden also will likely use Executive Orders to help set his agenda and get government agencies to fall in line with his policy priorities. He already has indicated that he will use Executive Orders to rejoin the Paris Climate Agreement, reverse withdrawal from the World Health Organization, and repeal the ban on travel from most Muslim countries.