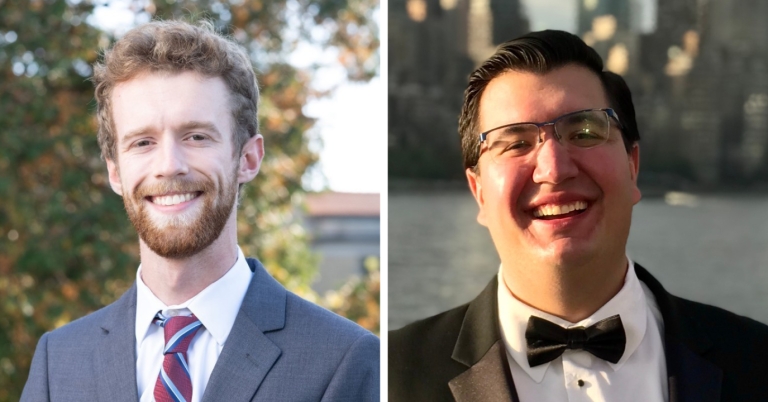 Earning a master’s degree in public affairs (MPA) from the La Follette School gives students more than an academic credential. It provides a real-world policy toolkit they can use on-the-job, even before graduation.

Just ask Evan Steck, a student in the La Follette School’s Accelerated Program. Steck began working in the Governor’s Office as an intern during his junior year at UW–Madison and now serves as a senior appointments coordinator. Combining this experience with his graduate coursework, he already is making an impact on policymaking in Wisconsin.

“Courses like PA 874: The Policymaking Process and PA 974: Politics of State Policy Issues helped me understand the role of gubernatorially appointed boards in the creation and implementation of state policy,” says Steck, who expects to receive his MPA in spring.

Noting that PA 974 is taught by former Wisconsin Gov. Jim Doyle, Steck adds: “It is interesting to contrast his experience in the state Capitol with that of the current administration.”

Steck received his bachelor’s degree in environmental studies and legal studies—along with a certificate in public policy—from UW–Madison in 2021.

As an appointments coordinator, Steck fills many roles. He helps the appointments director fill vacancies across more than 200 statewide boards and commissions and assists with the appointment of registers of deeds and coroners. Steck also corresponds with state agency employees to identify the membership needs of specific boards, reviews application materials, prepares briefing documents, and reviews applicants for positions. While he enjoys many aspects of his work, Steck especially likes the public service aspect.

“I get to serve the people of Wisconsin and play a part in making our state a better place to live,” says Steck, who is originally from Greenfield, Wis. “I truly believe this type of career satisfaction can be found only in the public sector.”

Fellow graduate student Michael Luckey has similar feelings about his work at the State Capitol.  Luckey received his bachelor’s degree in political science and government from Georgetown University in 2013.

After his undergraduate studies, he worked on several political campaigns, as a policy advisor and research assistant for the State Assembly, and as director of the Wisconsin Interagency Council on Homelessness. Since December 2020, he has served as chief of staff for State Sen. Kathy Bernier.

Luckey, who expects to complete his MPA in 2023, says the La Follette School has helped him “become a better consumer of the copious amounts of data we are presented with on a daily basis.”

PA 818: Introduction to Statistical Methods for Public Policy Analysis, he says, helped him “frame a discussion with the Legislative Audit Bureau in an advanced way. Some of the sampling techniques being discussed for a high-profile audit would have gone right over my head before taking that class.”

His fast-paced job requires him to wear many hats. No two days are the same, as he drafts communications, sets goals, conducts long- and short-term research, manages personnel, works with the media and much more. Sound stressful? It’s no problem for Luckey, who says the variety of tasks has allowed him to get to know more about his home state.

“I’m from Milwaukee, but I have always loved every corner of Wisconsin,” says Luckey. “This job has made me feel a personal connection to people and communities all around the state.”

While Steck and Luckey have different jobs, both note the need for good communication, writing, and organizational skills. They say networking is key for students seeking work in the Capitol and encourage their La Follette School peers to participate in learning opportunities that emphasize networking.

Steck and Luckey are two of the many La Follette School graduate students who are using their knowledge to make a positive impact across the state.

Master’s degree applicants have several degree options and are encouraged to apply for admission by January 1.

–written by Will Keenan