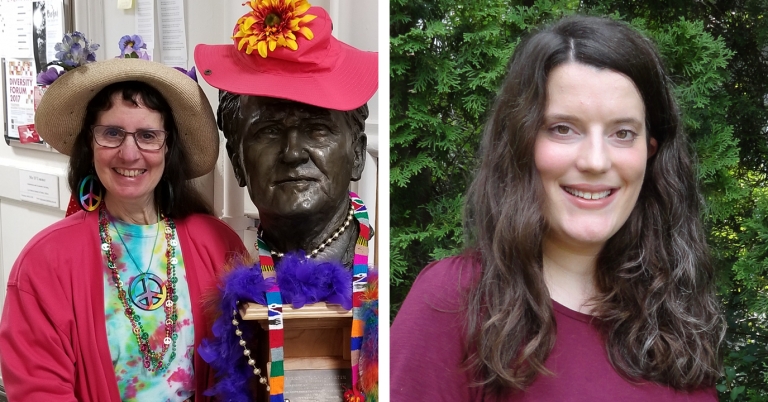 Matthews often was the first person to greet visitors to the La Follette School. Her responsibilities were as vast as her travels, her recipes, and her Raging Grannies songs. She coordinated the School’s annual Partners in Giving campaign, including a penny war that prompted friendly competition among faculty, staff, and students.

“Whatever the task, Marjorie embraced her role with great enthusiasm and a deep commitment to our students, faculty, and staff,” said La Follette School Director and Professor Susan Webb Yackee. “We look forward to seeing Marjorie in her colorful dress as she performs with the Madison chapter of the Raging Grannies, a group dedicated to ‘singing out against those things that harm the planet we will leave to our grandkids’.”

During Marjorie’s nearly 10-year La Follette School career, she received several campus awards, including the Doug Palm Community Service award for her Partners in Giving efforts, and a University Staff Excellence Award from the College of Letters & Science. She also was honored for her work with an International Student Services mentoring group that pairs a U.S. undergraduate student with an international undergraduate student.

Matthews joined the La Follette School in August 2011 as a temporary, part-time employee and became a full-time permanent employee in December 2012.

“It has been an amazing ride,” Matthews said. “I will miss the School in the day to day, as I figure out what the next chapter in my life is going to look like. I hope we cross paths as our adventures continue to unfold.”

Now greeting visitors and serving as the School’s administrative assistant is Emma Wasserstrom, who has bachelor’s and master’s degrees from UW–Madison. Wasserstrom received her bachelor’s degree in political science, French, and European studies in 2016 and her master’s degree in international education through the Professional French Masters Program in 2020.

Wasserstrom has experience with higher education administrative support as an intern with École Centrale de Nantes in France and as a graduate assistant with the Visiting International Student Program office on campus.