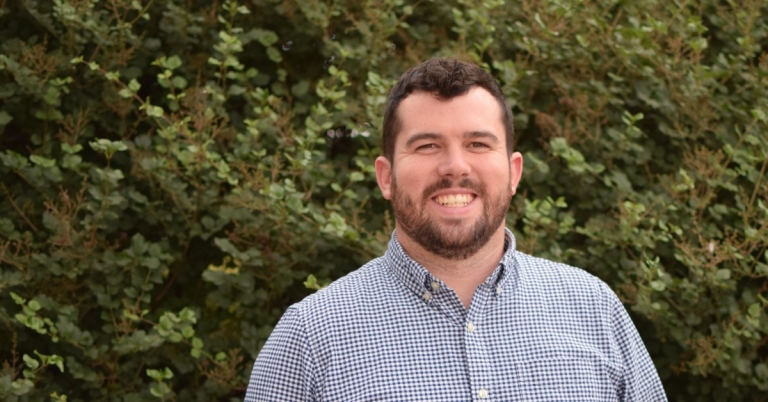 Wright-Racette, who joined the La Follette School staff in February 2017, was honored for his outstanding performance, service, and contributions. His award is one of only five given to L&S university staff members annually.

“His recognition is based on his overall impact to the La Follette School and greater campus, his ability to take initiative and improve methods that enhance workplace goals, his leadership qualities, and his ability to contribute to a positive workplace climate,” said Sr. Student Services Coordinator Mo O’Connor, who led the nomination process.

While technically his title is Student Status Examiner Sr., Wright-Racette is the La Follette School’s go-to person for on-the-spot requests to help students with registration problems and to assist faculty with class and grading issues, for data requests that shape admissions requirements, and for brainstorming best outcomes when challenging situations arise.

“I can always count on his responses to be thoughtful, timely, and accurate,” O’Connor wrote.

In 2019, Wright-Racette was honored with the Student Personnel Association Frontline Award. He grew up in the Barron County community of Prairie Farm and received his bachelor’s degree in political science from UW–Madison in 2014.

Among his many accomplishments, Wright-Racette has demonstrated outstanding leadership skills as the School developed and grows its Undergraduate Certificate in Public Policy. “David has been the driving force behind the nitty gritty details of the La Follette School’s first foray into the education of undergraduates,” O’Connor explained in the nomination.

Finally, but especially critical during the School’s busiest times, Wright-Racette is “the La Follette School’s resident expert in comic relief,” O’Connor wrote. “He is ever ready with a well-timed pun and has an aptitude for putting a smile on someone’s face. During a time of immense change, David has been a much-needed source of calm and quiet strength on which many of his colleagues rely.”