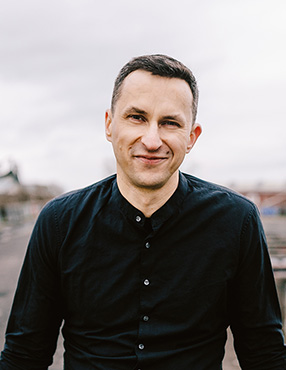 If your life has turned out well, congratulations. But don’t rush to take credit for it, because good and bad luck are partly a matter of genetic inheritance, according to the emerging field of social genomics.

“There’s a limit to what credit we can take for the good things that happen to us, and the blame we can put on people for bad things that happen,” says Professor Philipp Koellinger. “Since everything is heritable—even personality traits such as being conscientious—we shouldn’t necessarily pat people on the back for that.”

Recent discoveries in social genomics have profound implications for public policy, and Koellinger is on the leading edge. He investigates how genes influence economic behavior and how insights into the genetic architecture of behavioral outcomes can inform social and medical research. He also explores how the brain mediates relationships between genes and human behavior.

“I’m grateful to the La Follette School for supporting my work,” he says. “The Goldy award will help me continue my research on how genetic and social luck contribute to inequality and influence life trajectories in terms of socioeconomic status and health.”

Koellinger grew up in East Berlin, Germany, and his life changed when the Berlin Wall fell in 1989.

“It’s inconceivable that I could have ever been a professor at the University of Wisconsin–Madison if that hadn’t happened,” he said.

As an economist, Koellinger became interested in how genetics influences economic decisions. The Human Genome Project, completed in 2003, opened doors to collecting genetic data, and Koellinger jumped in to study educational attainment among more than 100,000 genotyped individuals.

“At the time, that seemed like an unimaginably high number,” he said. “But the technology has improved to the point that we are now able to examine data from millions of people. The field has progressed tremendously fast.”

Koellinger is a co-founder of the Social Science Genetic Association Consortium, the BIG BEAR Consortium, and the Externalizing Consortium. In January, he published “Genetic Underpinnings of Risky Behaviour Relate to Altered Neuroanatomy” in Nature Human Behaviour, showing how genetic dispositions translate into risk-tasking in drinking, smoking, driving, and sexual behavior.

The Goldy Award is funded by a gift from the family of Genevieve and Daniel Goldy. Daniel Goldy received his bachelor’s degree in economics from the University of Wisconsin–Madison. He was a protégé of UW–Madison political scientist Edwin Witte, who developed the legislation that became the 1935 Social Security Act. Goldy served in the Truman, Kennedy, and Johnson administrations.