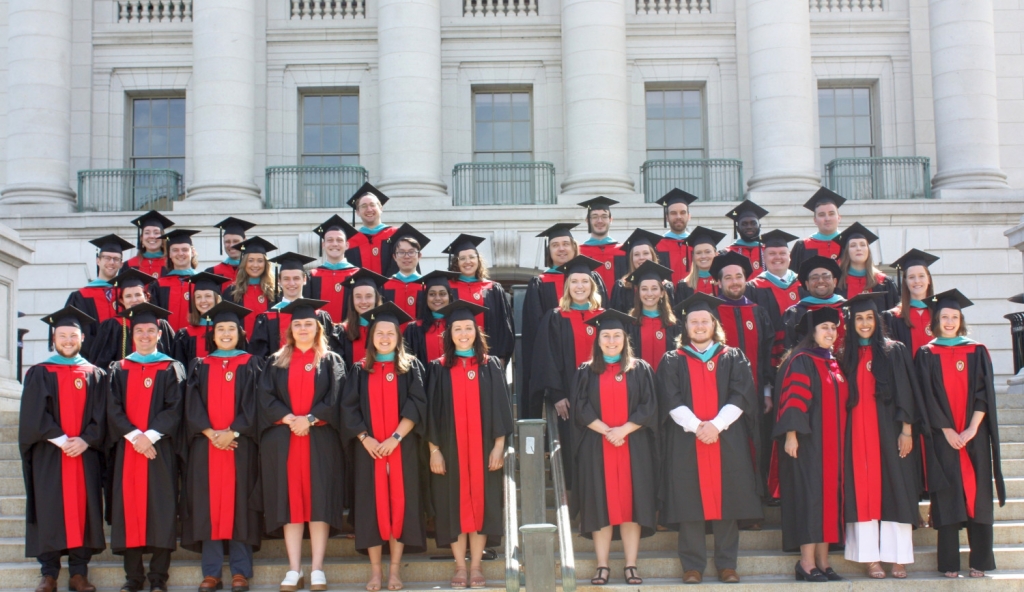 On Sunday, May 15, 47 La Follette students celebrated their graduation in the Wisconsin Capitol’s Assembly Chamber in the school’s first in-person graduation ceremony since 2019. Recounting some of the seemingly insurmountable challenges they have overcome, speakers emphasized the importance of holding on to optimism and gratitude.

In a powerful and moving speech, student speaker Carte’cia Lawrence (BA ’15, MPA ’22) challenged graduates to “carry a gratitude heart posture.” While starting a graduate program in the midst of a pandemic was difficult for this year’s graduates, she described her earlier memories in the program as “positive and life giving” and thanked her study group, “a group of powerful and kind and brilliant women who helped me my first year.” Noting that she gave birth to her first child during midterms, Lawrence gave credit to her family and friends for helping her through a challenging time.

Lawrence also talked about the importance of giving back by making sure others have access to opportunities. Echoing words of wisdom from Theola Carter (MA ’91), the La Follette School’s first speaker in its Elevating Equity series, Lawrence said it is necessary to make sure that people who are personally impacted by the programs and policies being implemented are represented at the table. “Who you have in the room is your politics,” she emphasized.

“I was so nervous coming into this program because I didn’t want to feel excluded in a field that is so white male dominated and I didn’t feel any of that,” reflected Lawrence. “Though many of us are so different, we’re all passionate about making this world a more thoughtful, equitable place, and that’s what makes us special.” She implored graduates to invite people to make an impact and to make the changes they want to see.

Professor Greg Nemet, who was selected by the graduates as their faculty speaker, talked about always remembering the reasons why the work of a policy analyst is so important. It is natural, he says, to ask yourself the questions, “Does good policy analysis really matter? Does it make a difference?” while on the other side there are political action committees and well-funded lobbyists. Nemet reflected on moments in his career that were the most challenging, noting that those experiences were often the ones that were the most meaningful and helped him answer these important questions.

He described his role as one of the lead authors on the United Nations Intergovernmental Panel on Climate Change (IPCC) report, where he went through an exhausting approval process to get the 20-page summary of the report approved by all 195 U.N. member governments. Spending years working on the IPCC report, months co-writing the summary, and hours at the podium explaining the report and answering tough questions eventually paid off when the report was approved and the messages that came out were clear.

“Doing good policy analysis is rare and it’s valued even if the results will never be loved by all,” remarked Nemet. “In my work on climate change, people often ask me how I can be optimistic given that the opposing political forces are highly mobilized, well-funded, sophisticated, apparently ruthless, and discourses of delay can seem to prevail.”

“We have a moral responsibility to be optimistic,” said Nemet. “Doing policy analysis requires optimism. It requires seeing the favorable possible outcomes and working towards them.”

Wisconsin Lieutenant Governor Mandela Barnes spoke candidly about the obstacles he has faced and how they shaped who he is today, the first African American Lieutenant Governor in Wisconsin and the second African American ever to hold statewide office. Like Lawrence, Barnes grew up in Milwaukee’s 53206 ZIP code, which Lawrence described as having “the worst health outcomes for its residents, riddled with boarded up houses and high incarceration rates.” Barnes emphasized that people are shaped by their upbringing and underlined the importance of including all voices in policy discussions.

“Notice who’s not being represented at the table. Advocate for them, hold the door open, and invite them into the conversation and ensure that the first becomes the many, that history will look kindly on how we made representation a reality rather than a dream.”

While Barnes acknowledged that it might be tempting to give up at times, he said, “We can’t afford to give up or subscribe to apathy over activism.” He saw his time in the Wisconsin State Assembly as “bringing a voice to a fight that often seemed hopeless” and highlighted the urgency of fighting for the rights and well-being of groups that often are not well represented. In his final words of advice, Barnes encouraged graduates to take a moment to explore and enjoy the state because “there are people all over worth fighting for.”

Matthew Voss (MPA) — Director’s Achievement Award for his outstanding academic record and his initiative and professionalism as a La Follette School student.

Master of Science in Urban and Regional Planning (URPL)